The Wichita Kansas Flag is a great way to show pride in our city. From shirts and hoodies to cell phone cases and coffee mugs, the design has become quite popular. It also has an interesting history behind it! 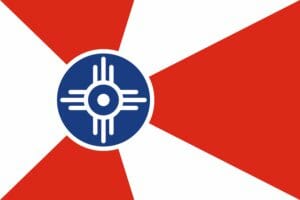 The city of Wichita was formally founded on July 21st, 1870. Despite its humble beginnings as a single trading post, it withstood the Great Depression, the Dust Bowl, and the ups and downs in the oil industry. Soon after, World War II triggered a boom in the aircraft industry, and many aviation factories and testing centers began to move into town.

Wichita was beginning to make a name for itself. It had already climbed from the nickname of “Cowtown” to “The Aircraft Capital of the World,”, but word-of-mouth representation and nicknames weren’t enough for the city. The leaders of the city wanted to craft a visual symbol — a flag — for the city to rally behind.

Wichita’s Mayor at the time was a man named T. Walker Weaver, and he and his councilmen decided the best way to create a flag representing a city would be to have the citizens themselves design it!

So, a competition ensued. The city offered a grand prize of $40 (roughly $700 in 2019), and over a hundred submissions poured in. A panel of artists meticulously judged each submission, eventually deciding on a design sent in by a man named Cecil McAlister.

Cecil McAlister’s design represented what the city of Wichita meant to him — freedom, happiness, contentment, and home. The blue sun in the center of the flag is supposed to be representative of happiness and contentment while the Native American symbol for permanent home is stitched on top of the blue sun. The rays of alternating red and white light radiation from the sun in the center is supposed to represent, “the path of freedom to come and go as one pleases”.

On June 14th, 1937, Cecil McAlister was announced as the winner by Mayor T. Walker Weaver, and his prize was awarded to him. After this, the Mayor recruited a seamstress named Mary J. Harper, the Betsy Ross of Wichita, to create the first Wichita flags.

Mary spent days sewing together the intricate designs and stitching of the flags. Upon completion, she had created six Wichita flags to give to the city. Finally, on July 23rd, 1937, Wichita’s first flag was raised up the pole of city hall.

Although the Wichita flag is over 80 years old, it has only become a popular cultural symbol in recent years. There was a period of renaissance for the Wichita flag, and the “Flag Fever” it created is still going on strong! 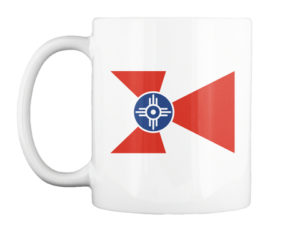 The flag can be seen around the city in places ranging from T- shirts to tattoos to stickers to murals, mugs, notebooks, and anywhere else that the proud citizens of Wichita can think of placing it.

If you are interested in scoring some Wichita gear for yourself or as a gift, please check out our online store!

8 thoughts on “The Wichita Kansas Flag”