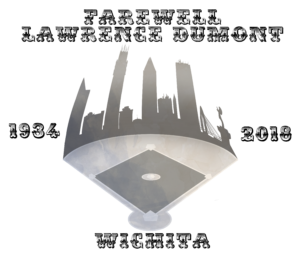 Anyone who has any connection with the town of Wichita, Kansas, would know about the iconic field. This stadium has been a part of the Wichita landscape since 1934 and has been the retreat for baseball fans and a source of great joy and pride over its eighty-four years of existence.

The stadium accommodates 6,400 people – the intimate nature of the stadium has resulted in the fans bonding together whenever a baseball game is hosted at the stadium.

However, the time is up for Lawrence Dumont Stadium and it will be completely demolished in the next few weeks, paving the way for the development of a new 75 million dollar stadium that will be the home of a Minor League Baseball Team, the New Orleans Baby Cakes.

The history and significance of the Lawrence Dumont to the town of Wichita should not be discounted. We will chronicle the history and impact that the stadium has had on Wichita and its surroundings over the last eighty-four years.

The main person behind the idea to create a stadium in Wichita was local businessman Ray “Hap” Dumont, who convinced the former Mayor of the town, Charles Lawrence, of the need for a baseball stadium in the region.

This stadium was necessary after the first baseball stadium in the area – Island Park which was built on the Akerman Island in the Arkansas River was torn down to facilitate the widening of the river channel. Island Park was in existence from 1912-1933.

Lawrence commissioned the creation of the stadium in 1929 and construction was completed in 1934. He strongly believed that the stadium should be located within the boundaries of the town and the stadium was built on lands given to the city by local landowner Charles Payne and was named the Lawrence Stadium in 1934 in honor of Mr. Charles Lawrence who died that same year.

When the Lawrence Stadium opened in 1934, it had no tenants and was used to host the National Baseball Congress (NBC) games, which was a semi-professional tournament created by Hap Dumont.

In the first year of the tournament, Dumont used his business savvy and negotiation skills to convince baseball legend, Satchell Paige, to bring his team – The Bismarck Churchills to the new Lawrence Stadium to partake in the NBC World series League. Paige was reportedly paid $1,000 to be a part of the League.

For his outstanding contribution to the construction of the baseball stadium in Wichita, the stadium was renamed the Lawrence Dumont Stadium in 1971 after the death of Hap Dumont. He is considered by many as the single most important figure in the history of baseball in the Air Capital.

After a break of fifteen years with no team being hosted at Lawrence Dumont Stadium, the Wichita Aeros came onto the scene in 1970. They played in the Triple-A American Association Minor League between 1970 and 1984.

The Aeros were associated with five major league baseball clubs (The Cleveland Indians, The Chicago Cubs, The Texas Rangers, The Montreal Expos, and The Cincinnati Reds) during their fifteen-year history. The Aeros won a single division title during their era here and then transferred to Buffalo New York in 1984, changing their name to the Buffalo Bisons.

The Wranglers team was based at the Lawrence Dumont Stadium from 1987 -2007. The team played as a part of the Texas Minor League and was an affiliate of the San Diego Padres Major League team from 1987 to 1994. They were also affiliated with the Kansas City Royals from 1995 to 2007. The Wichita Wranglers won the Texas League Championship on three occasions – 1987, 1992, and 1999. Then they moved to Springdale, Arkansas in 2007. They became the Northwest Arkansas Naturals.

The Wichita Wingnuts are the most recent team to reside at the Lawrence Dumont Stadium. They had been at the Stadium since 2008 and played their last game in 2018 when the lease was terminated by the city of Wichita. They played in the American Association League and won the championship in 2014.

Renovations at the Lawrence Dumont Stadium

This iconic stadium has lasted eighty-four years in the River City. For the stadium to have the longevity that it has had, renovations were necessary.

Major improvements were made in 2001 and 2011. In the 2001 phase of the refurbishment the infield turf was re-laid, a new outfield fence was built, the sound system was improved, and the seating area was repainted.

In the 2011 wave of renovations, the entire grass outfield and AstroTurf infield were replaced by a ram turf which is a more modern type of surface. New lights were also installed, the dugouts were extended, and the concourse areas were also improved. These renovations allowed the Lawrence Dumont Stadium to continue functioning as a good venue for hosting baseball games.

Even after those efforts to continue the legacy for the fans, this year the city finally decided the stadium had outlived its usefulness and that a new stadium was necessary to continue the rich baseball tradition of Wichita.

This new stadium will be built on the same venue and is scheduled to be completed by the 2020 baseball season.

The End of an Era

Finally, the inevitable demolition of the Lawrence Dumont Stadium has pained the hearts of Wichita baseball supporters. Since this is the stadium that has been the home of Wichita Baseball for generations, it will be missed.

However, the building of the new and improved stadium will inspire renewed hometown hope of a new baseball beginning. A continued legacy and an exciting future for the baseball crazy town of Wichita.